I've been a little quiet on the Habari front of late as I've been very tied up with $work and my own dev stuff (check out my new personal site design) so have just been lurking on IRC with very little in the way of contributing. I hope to change that as there are some pretty exciting things coming with some major enhancements and loads of bug fixes making their into the code that will be Habari 1.0 (and if I don't pull finger, I'm going to be left behind).

To start with, Habari 0.9.1 has just been released. Loads of bug fixes and enhancement here, especially for those who plan to install Habari on Windows hosts.

Next we finally have an "Addons Catalog" to make showing off, reviewing and installing plugins and themes a cinch, and I think the implementation is pretty impressive too...

The Catalog is currently powered by Github, and pulls from Habari Extras. What is exciting is that the catalog has been crafted to allow you to host your addons in your own repo. We don't lock you into using a repo we control. Simply add a call to our import beacon to your webhooks list, and you are good to go. In the coming months we will be releasing support for other repository providers like bitbucket and beanstalk. Did we mention that you can find the code that powers our catalog in Habari Extras? Feel free to fork away and do something amazing with it.

A little more work is needed on some of the plugins in Habari Extras, but with time everything should be integrated and easily installed.

Last but not least, the Habari site has a gorgeous new design... not just a new layer of paint, but a whole new design, and it's amazing.... 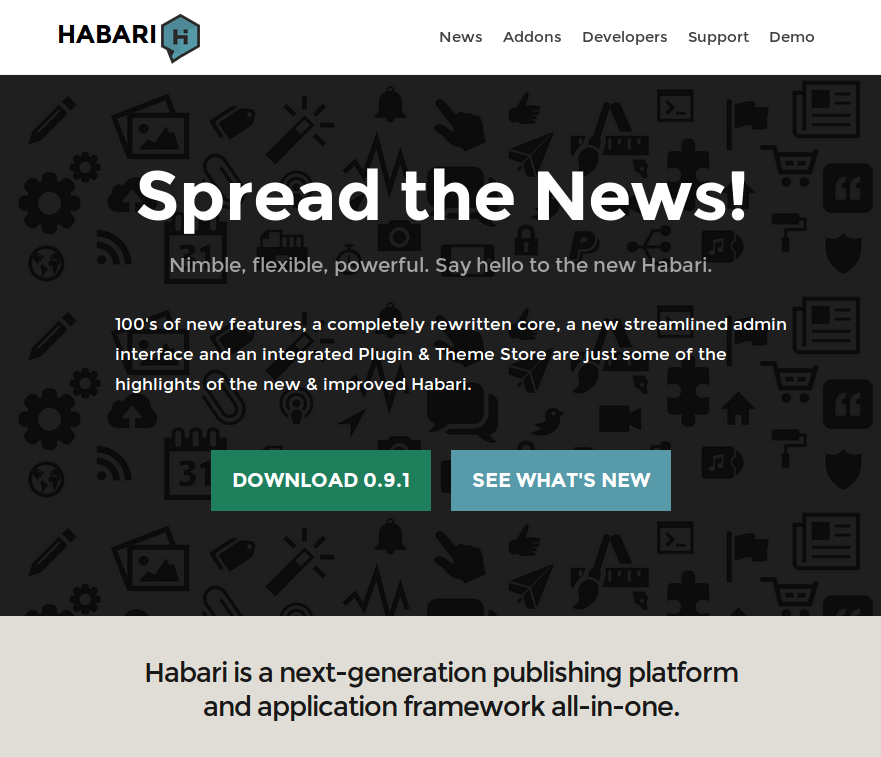 The screenshot just doesn't do it justice. You must head on over and check it out in all its glory and whilst you're there, be sure to check out What's New.

A huge big thanks needs to go out to the guys, you know who you are, who've spent endless hours fixing bugs, enhancing Habari, creating the Addons Catalogue and the awesome new site design. Brilliant work!

If you're starting to get annoyed with Wordpress and are looking for something leaner, meaner and far superior, give Habari a go. You won't be disappointed. Oh and don't be shy to drop us a line, join us on IRC or start contributing... as Tescos say: "Every little helps."