You've upgraded to OS X Leopard, played with Time Machine, tweaked things to your heart's content and now you want to play with something else cool you've heard has made it's way into OS X - ZFS.

Unfortunately, Apple have only bundled read-only support for ZFS to date, but we'll be changing that.

WARNING: ZFS read-write support is still very experimental and if you're not careful, it WILL crash your Mac.

Right, now we've got the warning out of the way, lets get cracking.

Get and Install read-write ZFS support

First, you need to get hold of the ZFS Beta Seed pkg from the ADC. If you don't have an ADC login, you can register for free.

Due to an unfortunate bug in the packaging, you won't be able to install the ZFS Beta Seed pkg by simply double clicking the pkg if you're running 10.5.1. This bug doesn't affect 10.5.

There are several ways to resolve this, but I like the one detailed by Shawn Ferry the best:

Now we've got read-write ZFS support installed, we can create our first ZFS filesystem. In this example, I'm going to use a USB memory stick, but you can use any free partition, or even files (drop me a line if you want to know how to do this with files).

That's it folks. You now have a ZFS filesystem that you can use as you would a normal filesystem. You can confirm this as follows:

You can now play with things to your heart's content. For example, you can create a new ZFS filesystem on this pool:

And you'll find Finder shows it too: 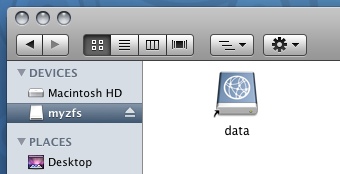 You can find more about what you can do with ZFS in my ZFS Cheatsheet, just note it's based on the functionality available in OpenSolaris. OS X may not have all this functionality yet.

Now for the important part: right at the beginning, I said ZFS WILL crash your Mac. I wasn't joking. Just remove the device you have been using, try access it in Finder and see what I mean.

Unfortunately OS X isn't too good at detecting missing devices under ZFS control yet, so it panics your system. You can prevent this by ensuring you export your ZFS filesystem BEFORE you attempt to disconnect your devices using:

Don't just eject the the filesystem from Finder as this doesn't change the ZFS metadata for the device (yet).

If you want to use your device again in the furture, connect it, unmount the device in Disk Utility as above, open the terminal and import the filesystem:

You'll now have your ZFS filesystems as you left them.

Now at this point you may be wondering what the fuss is all about, you can do this with HFS+ or FAT anyway. I agree you can, but the true power of ZFS comes to life when you have lots of disks, or you want to setup some sort of redundancy using RAID. This is very easy with ZFS and you'll be safe in the knowledge that your data is safe.