JAVA Ticker Not Going Down Well

You should read the comments on Jonathan Schwartz's blog about Sun's decision to change the stocker ticker from SUNW to JAVA. It's just pure pointless, and often thoughtless, hostilities. I think there are about 10 favorable comments in all, out of the 335 (and counting) comments so far.

For some reason, people seem to think Sun is making a strategic directional change, or putting all it's efforts behind Java. It's not. I view this as a relatively cheap way to get Sun Microsystems known by the average Joe Schmoe. Techies know about Sun. The average Man on the street doesn't.

Take the situation of a company looking to buy a shed load of new kit. The techie knows Sun has great products, brilliant support and is about 5 years ahead of the competition. However for a proper tender he has to get data from other companies too. So he puts together his report, and takes it to the businessman who has to sign it off. The techie will put in his favorable comments for Sun, but the man with the money will think... "Sun? Who are they? They're that newspaper aren't they? No? Never heard of them. This HP company, now I've heard of them. My laptop is from HP. I'll go with HP." And he signs away millions of dollars to HP. Why? Because of superior products? Nope. Because he's heard of them. Your average member of the public doesn't know anything about Intel, but they all know about the "Intel Inside" logo.

Whilst I don't think the stock symbol change will boost Sun overnight, I do think it's a step in the right direction. The kids of today, the ones who see the Java logo on their mobile phones, are the investors and decision maker of tomorrow. Sun has spent too much time relying on the techies of the world and not enough time exploiting the general public. I think this is a step in the right direction to changing this.

Hey, if anything, the amount of "disgust" shown by all the commentors is sure to draw even more attention to Sun, and potentially draw in more investors and customers. Check how the stock rose on Friday alone - the last day of trading as SUNW: 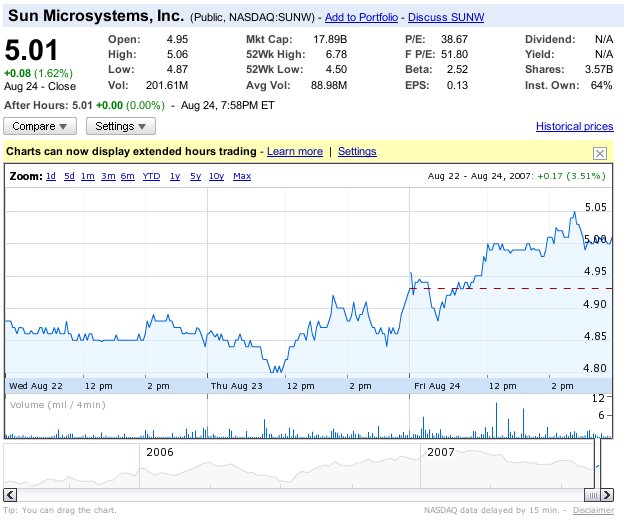 On a side note, whilst Java historically was slow, clunky and quite rubbish, it's not the case anymore. If Java was so crap, it wouldn't be on so many devices. What's more, if Java was so crap, why has the Linux community been crying for Sun to open source it for so long. Surely if the technology was crap, the Linux community would have gone for something else a long long time ago.